Women In Technology and Atlanta Girls’ School partnered in December for a screening of CODE: Debugging the Gender Gap – a film that explores why women are underrepresented in tech today and provokes us to think about solutions to grow female representation in the industry. 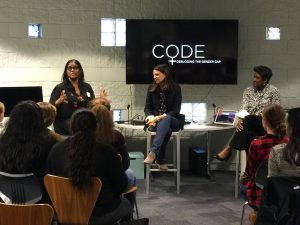 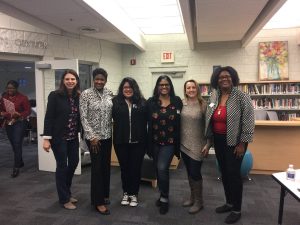 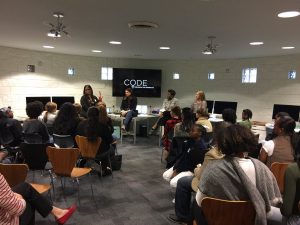 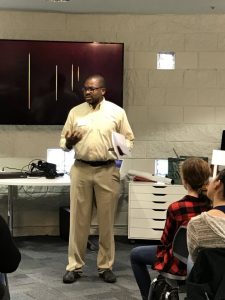 The screening was followed by a panel discussion featuring Angie Brown, Rachel Bagnell, and Wendy Frazier, who are leading women in the tech arena.

ANGIE BROWN
Angie Brown is Vice President of Technology – Store Systems at The Home Depot. Upon graduating from the University of Georgia with a degree in Management Information Systems, Angie joined the Home Depot as an entry-level software developer. Since then, she has held roles of increasing responsibility and currently supports the in-store technology systems in Home Depot’s 2200 stores across North America. Angie and her team have also played a significant part in The Home Depot’s interconnected retail journey with several key deliverables for our strategic objectives, including implementing an order management system which powers all of our interconnected orders, homedepot.com and our in-store ordering platform. Outside of work, Angie enjoys spending time with her husband and two daughters.

RACHEL BAGNELL
Rachel joined State Farm in 2000 as a Technical Coordinator in Administrative Services in State Farm’s Corporate office in Bloomington, IL. She was promoted to a supervisor and then assistant manager in Administrative Services, which provided her the opportunity to make moves to both Texas and Florida. She then began a development opportunity as a Claims team manager, also in Florida, before returning to Administrative Services in a manager role in Atlanta. In September 2014, Rachel joined the Internal Audit Department as an IT Audit Manager. During her time in Internal Audit, Rachel managed both IT and Integrated (IT and business) audits. Rachel is currently an IT Manager responsible for enabling IT department growth in Atlanta. Her focus is on recruiting & hiring, mentoring, and Campus Manager work for universities in the Atlanta area. She helped build State Farm’s IT talent pipeline for the future by building community relationships, engaging students in technology, supporting STEM, providing mentoring opportunities, creating excitement and awareness about IT careers and increasing community visibility of State Farm’s brand in our strategic locations.
Rachel works with organizations such as Girls Who Code, Women in Technology, Technology Association of Georgia and TAG-Ed, NCWIT, BDPA, and supports several Atlanta metropolitan schools for their STEM efforts. Rachel has a Master’s Degree from Illinois State University and holds several designations including Chartered Financial Consultant (ChFC), Chartered Life Underwriter (CLU) and the GIAC Information Security Fundamentals (GISF) Certification. Rachel is the proud mother of two future STEM professionals, and current technology enthusiasts – her 6-year-old daughter and her 9-year-old son.
WENDY FRAZIER
Wendy Frazier brings more than 17 years of experience and leadership in the digital space. As VP of Software Engineering for The Weather Company, an IBM Business, Wendy oversees the web engineering team. She is responsible for the development and scale of new sites, management of existing and expansion into the emerging markets. Wendy joined Weather in 1999 as a software engineer of business development, developing and distributing data feeds to various clients. Intrigued by the web landscape, Wendy worked her way through the business ladder to now overseeing the division she once built apps for.
Wendy is a board member of Women In Technology (WIT) and actively works with Technology Association of Georgia (TAG), National Association for Multi-Ethnicity In Communication (NAMIC), Alpha Kappa Alpha Sorority Incorporated and several other digital industry groups. A native of Atlanta, and diehard Falcons fan, Wendy reside in Atlanta with her family.